This was hard decision. I used HTC Tytn II with Windows Mobile 6.1 on it for last two years. It works well but has some problems after two or three landing on asphalt and some wet and freezing days.
After some days of reading the specifications I decided to give a try to Android.
My mobile network operator (Mobitel) just has a good offer for Samsung Galaxy S (SGS).
Here are some thoughts after ten days of hard using and my first experience with Android (2.1).
I’m impressed with how quick SGS is. At least until you install many applications and widgets. Some of them can really slow down your phone, so be selective with installations.
At first contact everybody will notice a fantastic Super Amoled LCD. There isn’t much to talk. It is very sharp and bright, but like other Amoled screens SGS also don’t preform as well under direct sunlight.
One of the main advantages to HTC Desire is battery. I still can’t believe how good it is. On HTC Tytn II I run out of battery after using GPS for one hour. Now, on SGS, I can use GPS some hours and still have enough battery to talk and surf. Display is biggest consumer, so it is understandable to shorten screen time usage and brightness. There are also some other (sometimes unnecessary) energy consumers: Wifi, GPS, 3G … avoid using them (turn it off), if you don’t use them at the moment.
I tried to talk with SGS on location with weak 2G/3G signal. It performs very well, so you won’t be disappointing if you live in such area.
There are also camera and video (even with 720HD). Useful, but without flash.
Here is one evening photo: 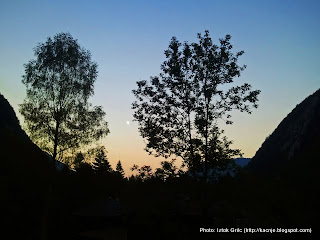 Physical quality of SGS is better than I expected. Really – I thought that SGS will have weak plastic, but it feels good in your hand and gives good feeling.
Android – my SGS had preinstalled Android 2.1. I’m happy with it. You simply don’t need stick any more (like on WM 6.1 and WM 6.5). Many things are well considered, user interface is really good. This was my first meeting with Android and I’m impressed. I’m waiting for Android 2.2 (aka Froyo – it is announced for September) with some additional improvements.
Even synchronization with Exchange works – it is limited on e-mail, calendar and contact – but this works without problems. Maybe I notice some strange thing on my calendar, but it looks that this is widget problem. Be aware that you can’t synchronize Notes and Tasks from Exchange without third party apps.
Normally, you can customize your phone for your needs. There are thousands of apps and widgets for everybody. It takes hours to check them, but you can find really good and useful apps.

And disappointments?
Hera are some of them and I can annotate some of them to other partners, not to Samsung or Android developers.
SGS don’t have a LED notification for missed calls and missed SMS. I don’t know why, but it is nice feature for me.
I noticed that phone runs slowly after I installed some application/widgets. I have to check what apps is guilty.
You already read about synchronization Exchange Notes and Tasks. I hope Android 2.2 will have a solution.
I use Skype every day for work and hobby. But – you can’t find Skype on Android. There was some other applications, but Skype uses closed protocol and this wasn’t good solution. After checking at Skype they can’t answer me. It looks that I should choose another application instead of Skype.
Second application I use a lot is Nav N GO (or I-GO). It works on Android, but not on big (800×480) resolution … after checking at company, they didn’t give me satisfying answer. I tried some other navigation apps, but I will wait for I-GO (Nav N GO).
Thinkfree is online office solution and also have mobile apps (it was preinstalled on SGS). Well they said you can synchronize documents even with Google Docs, but some weeks ago, Google drops cooperation (this is information from Thinfree support). Hm … it looks like Google isn’t so open as it looks.

Conclusion – I will pay 360 EUR in two years for SGS. Phone is loaded with newest technology and is probably one of the best phones on the market.
Until now I can highly recommend this phone to my friends. I hope it will serve them (and me) as it should.