But when this feature appeared on my phone, I knew that it is time to try it immediately in real navigation (AR walking navigation).
The feature is still in a testing period and is labeled with “preview” strip on the right upper corner. Besides that, an application asks you for experience after navigation. 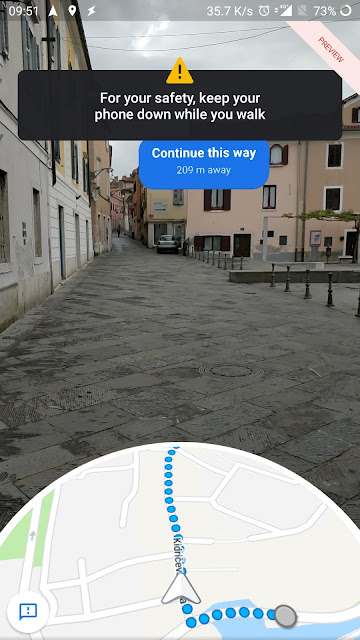 At this moment Google Maps AR helps you when walking. Using it, you won’t walk in the wrong direction until realizing your mistake and wasting your time searching for turn points.

For AR navigation Google uses a method named “global localization”. It combines machine learning and Visual Positioning Services with Street View.
I was skeptical if this will work in Slovenia, but I was surprised that it works very good. At least in Ljubljana and Koper where I tried it.
If AR navigation can’t find known buildings and landmarks, it will offer to use regular navigation instead. While walking in Koper, it works surprisingly well. Even in narrow streets. 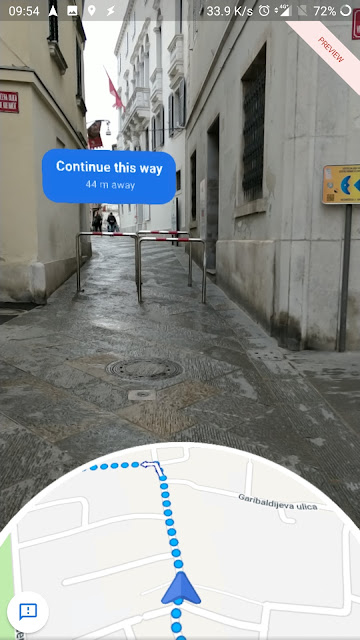 Usage is simple – press an “AR Start” button when using walking navigation. Then point your phone’s camera at surrounding and an application identifies the known points (landmarks).
It will draw navigation-related information (direction, distance…) on the phone’s display.
The bottom of the screen still shows an ordinary Google Maps view. The application also shows a warning to keep your phone down while walk. It is usually enough to check the phone screen only from while to while. Just rise your phone to check if you are on the right way and then you can keep your phone down while walking forward.
It is worth to mention that AR navigation works surprisingly fast and can be used without delays if you have good light and internet connection. Yes, I said good light, because using AR navigation at night still has problems.

It is also understandable that battery consumption is higher than with a usual 2D navigation. The phone does get pretty warm too. 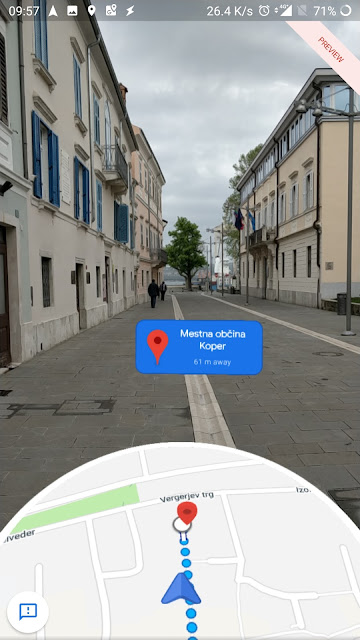 I don’t have no idea when this will be available to all users. I’m a Local Guide and Google Maps Beta tester and some features are available on my phone earlier.
There are some clumsiness and ambiguity. And a question – is this usable?
Technically speaking, it is clearly labeled with alpha version and we can expect that things will improve. But – will people use AR instead of usual navigation? It has potential. Maybe AR will show additional information on the screen. That would be a nice add-on. Using AR with smart glass? On cars Head-up Display?
What is your opinion?