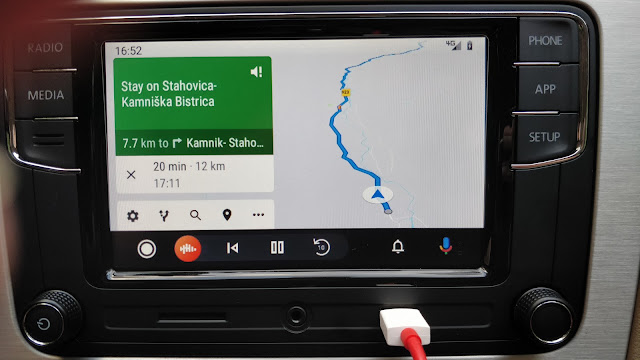 Three years ago, I published an RNS 510 review. To be short, it is a good head unit, but its’ navigation and missing Bluetooth connectivity drove me crazy.
My budget was limited, so I decided that 300 EUR is more than enough to get a 2-DIN head unit with most wanted features which will work in VW Passat. At first, I was looking for a head unit with Android as its operating system. But then I found that some people mentioned RCD330. The model name looks like those from Volkswagen’s line and after some reading, I got a confirmation. It is an OEM head unit built-in Volkswagens in China, Russia, South America… It has some limitations, but on the other hand, it has some nice features all packed in the head unit with an acceptable price.

You can’t buy it from Volkswagen, but you can find RCD330 in different stores (AliExpress, eBay…). There are some different subtypes of RCD330 and my suggestion is to read (at least) sticky posts on Reddit RCD330 subforum to get some important information.
I decided on RCD330 187E which supports Android Auto and CarPlay. The delivery from China was fast – a DHL delivered it only five days from placing an order. I can really recommend a seller Lemon Shark Autoparts Store for fast delivery and accurate information before ordering. 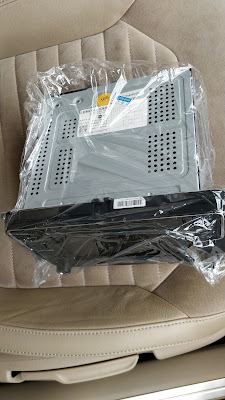 RCD330 supports communications with Volkswagen’s CAN bus and changing RNS510 for RCD330 is quite simple. You need to plug only two connectors – Quadlock and antenna. My previous RNS510 installation also needs a connection for GPS antenna and phone.

Cars from the last decade don’t need any changes in the gateway. Older can experience battery drain, so check for solutions on the above mentioned forum.
Just to have a clear error log, I remove the Navigation and CD from CAN Gateway Installation List with VCDS.
As I said, it supports communication with Volkswagen, so if you have sensors, it will be shown as before. Besides that, it will also show temperature, get a date/time, works with a back camera (maybe with little intervention) …

RCD330 looks very similar to other Volkswagen’s head units in the same generation. Pretty good color display and touch screen still have to prove over the cold months when cheaper head units usually have problems.
I’m not a sound expert, but the sound in my car didn’t change a lot after the RCD330 installation. To be honest, I can’t hear any difference.

Potential buyers should keep in mind that RCD330 has some important limitations: missing CD unit, missing its own navigation and missing RDS (Radio Data System) support.
Missing CD unit today isn’t a big deal. The navigation can be used with Android Auto, so this won’t be a big problem. But missing the RDS feature can be a deal-breaker for people who listen to the radio. To be honest, radio works fine, but part of the RDS system is AF (alternative frequencies list). Almost all radio stations use this feature which helps head units changing between different frequencies for the same station. This is very helpful if you drive in a region full of hills, mountains, valleys… Without AF you have to search for frequencies that really isn’t comfortable. 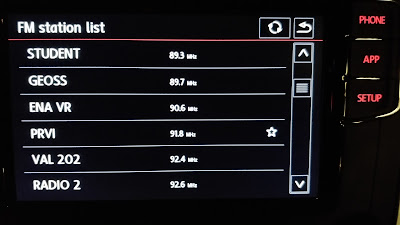 Many websites write that RCD330 doesn’t have an RDS at all. On my head unit, some radio stations are displayed with their names. I don’t understand why only some don’t have a name. And even more strange thing for me – if RCD330 displays a name, why a hell can’t it save it to his own memory list. It can save a frequency and memory position for example, but can’t save a string it has? Strange, really.

RCD330 has four different modes: Radio, Media, Phone, and App.
Radio was described in the previous paragraph, now it is time to check Media mode. As you can expect it supports Bluetooth, AUX, SD card and USB. For me, Bluetooth is everything I need and it works flawlessly. It connects quick, works without disturbances and sounds good. Hey, it even shows Unicode letters on display (for example Slovenian čšž).
I really like the next behavior – if listening to the podcast (or music) is interrupted before the end(eg. car is switched off), then next time it will start immediately at that position after you start the car.
However, some things could be improved. For example, if a new file on the phone starts to play, the previous source (Bluetooth in my case) can be preselected. Or if you are in Radio mode and start playing via Bluetooth, it doesn’t jump to Media (and start playing). And one more – when media is played, it shows timeline, but you can’t use the touch screen to move to a random position.
It is also strange to me, why RCD330 stays mute after finished playing media, even if I change to Radio mode?

Phone mode works with my OnePlus 5 as it should. It uses its own microphone, so you don’t need to install an external one. Some users comment that this can lead to echo when speaking, but I didn’t notice it. 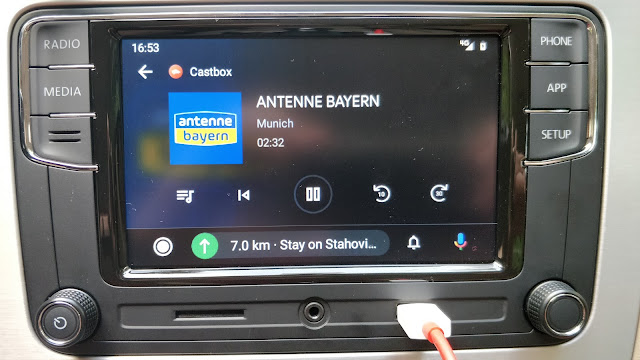 Pressing an App button changes a lot. RCD330 gives control to your Android (Android Auto) or iPhone (CarPlay). In this mode, your phone must be connected with a USB cable and (for example on Android) Android Auto has to be installed on your phone. If Android Auto isn’t officially supported in your country, you can still get it, but it is beyond this article. Read more about Android Auto on Google’s website.

I have to mention quite a big bug. I’m still not sure if bug belongs to RCD330 or to Android Auto. It shows if a user has his phone connected to Android Auto (App mode on RCD330) and then switch off the car. Next time, the Bluetooth on your phone won’t recognize the RCD330 and vice versa. Annoying. The solution is to change from App mode to any other before switching off.

Let’s go back from the Android world. On my steering wheel, I found a button with a microphone sign. Originally it serves as a trigger for voice command in navigation on RNS510. But after installing RCD330, it works as a mute button. I took a computer with VCDS and searched for a solution. A small change (one byte) and button’s behavior changes to the voice control. This works fantastic with Google Assistant. Now I can listen to the radio and press button on the steering wheel and ask: “How is the traffic to Ljubljana?”, “What is the weather forecast for tomorrow?”, “Where is the nearest pizzeria?” … And all that even without “Ok, Google”. After I get an answer, the radio (or media) plays as before without any intervention. Super.

Some words about manual (user guide). I’m the kind of person who likes to read manuals. I want to know as much as possible about the products/services I use. It was very hard to find a manual for RCD330. And now I can share a PDF file of the RCD330 manual. Well, the title is RCD340, but that is just different labels for markets.

Conclusion: Under the line, I’m happy with RCD330. It has some bugs, but I can live with them.
If you are in the market for a head unit under 300 EUR, then RCD330 (RCD340 or one of their cousins) are certainly worth a look.
Your comments are welcome.