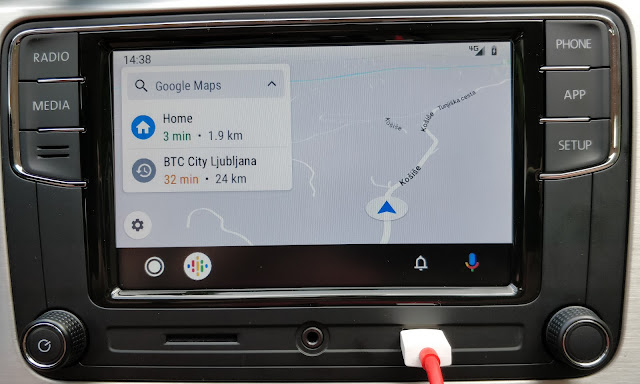 I’m using Android Auto almost from its beginning. Until a few weeks ago Android Auto was only my phone, but now I’m using it also on my new RCD330 (click for review).
I often get questions about how Android Auto works, how to install it…

In the next lines, you will find that there are some differences in both ways of using. Usually using on the head unit isn’t so convenient.
Let’s check some of them:
– When using the navigation on the phone, you can report speed traps, crashes, slowdowns…This option isn’t available on your head unit and you can’t report obstacles there. 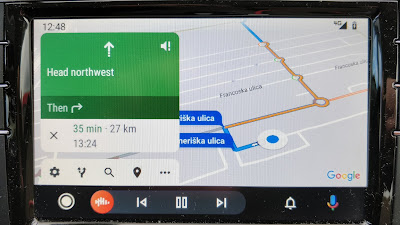 – Google Assistant is very useful for communication while driving. It works quite well on the phone but is much worse on the head unit. What really surprises me, is the fact, that answers are different. For example, if I try with searching for gas stations the results on the head unit were way off. But it works on the phone. The next example is my often command “save note to keep” when something crosses my mind and is worth to save. This works fine on the phone, but it doesn’t work on the head unit.
– The navigation on the head unit doesn’t allow searching on Google Maps while the car is moving. I understand the safety point of that, but maybe passengers can use it? It works on the phone.
– Zooming in navigation in Google Maps on the head unit isn’t as good as on the phone. It simply doesn’t presume the moving of the car. Usually, it is zoomed out too much. It works much better on the phone.
– Sharing your location with the head unit is quite limited. On the phone, you can select many different ways (SMS, Facebook …) to do it, but on the head unit, only some are displayed (email).
– Notification for speed cameras isn’t perceptible and should be different. If a user listening to the radio, it is almost inaudible.
– Facebook Messenger notifications don’t show.
– With the latest UI upgrade (August 2019), Android Auto on the head unit doesn’t show cards anymore. Cards are still shown on the phone and I really like them. Cards show important information and have a nice design. When using Android Auto without navigation (especially on the phone), I would like to have a feature that switches on the display only occasionally or if something happened. Otherwise, the display should be switched off. This would help to save battery.
– While changing between day and night mode works quite good on the phone, it doesn’t on the head unit. The main reason is probably that it generally gets lighting information from your car. But cars have many ways to deal with that. It can switch on lights when you came into a tunnel and then leave lights on. If you don’t use an application like Android Auto, you won’t even notice that. But using night mode Android Auto navigation on a sunny day can be uncomfortable.
– While listening to music or podcast on a phone, you can move the current position with slider. Forget that on the head unit with Android Auto. There are only buttons for skipping 30 (or 10) seconds. Be a hero and move your podcast 20 minutes forward. Besides that, it would be nice if the listener could see the current position while a navigation screen is on.
– One really annoying bug exists – after disconnecting the phone from the head unit USB cable, the phone loses Bluetooth pairing. Before the phone can be used again with Bluetooth, it has to be paired again. I’m still searching for a solution. Until now, it looks that it is important to disconnect the phone before turn off the radio and leave the car. Otherwise, it will ask you to re-pair the phone the next time you enter the car.
– Using Android Auto with USB cable isn’t very convenient. Newer head units support wireless communications with (some) phones. This the way to go and if you can afford it, there is no brainer.
A solution is buying a wireless adapter – good example is Carsifi.
– When the phone is connected with a USB cable, it is used for data transfer (communication) AND for phone charging. This charging is quite powerful and the phone’s battery is full quite fast. As you know (look at the article Best phone battery saving tips) fast charging and too much charging is unhealthy for the phone’s battery. This is another important reason to use wireless communication with the head unit. 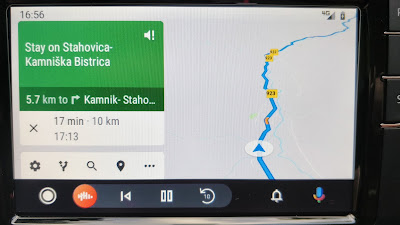 In the lines above, I wrote about the most annoying issues with Android Auto I found when the phone is connected to the head unit. Of course, there are more of them and although Android Auto is very interesting (and useful) in its basics, it is still far from perfect.
I’m aware that UI can change without prediction and I hope Google will soon changes/solves the above-mentioned issues.

What are your opinion about Android Auto?